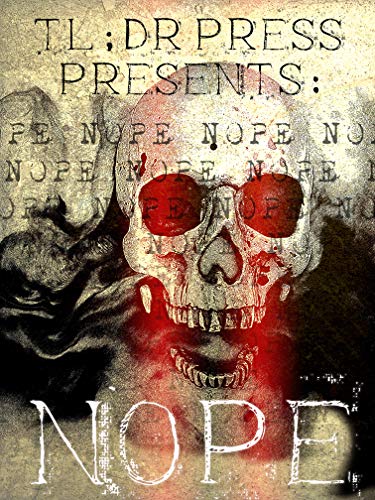 The title may be called “Nope,” but do I want you to buy it? Yes! You can download the ebook here to read my short story “The It” and support the Pilcrow Foundation while you’re at it!

While you’re also on amazon, you can download or order a copy of the previous anthology I got into earlier this year, and read my first published short story “Catherine and the Wasteland.” I’ll provide the links again here:

Read the full version of “The It” here.

Read the full version of “Catherine and the Wasteland” here.

Hope you enjoy both and drop me a comment or an e-mail to tell me what you think of it! And as always thanks again for your support!

Also, yes, it’s true, “The It” is definitely being published! It might look like I’ve just been binge watching Halloween films (at least according to my twitter feed), but I’ve also been hard at work writing! Also, it is October and that’s the one month out of the year where binge watching scary movies is given a free pass in my corner of the world without being thought of as a total weirdo so…

Anyway, TLDR Press has been very kind to accept this story that started as a vague nightmare that I woke up from back in September. It’s a bit unsettling, if not miraculous, that that situation somehow made its way to being expressed as a piece of publishable fiction (though, to be fair, I was also on a deadline and no other ideas were panning out).

It wasn’t easy, but it was certainly doable. Special thanks to my assigned editor — David Clark — for helping me clean up the prose and asking me the right questions. Additional, special thanks, also goes to the curators Camden Collins, Joe Butler and the rest of the editors at TLDR Press who helped make this happen!

TLDR Press has been a great publication to work with in the past, especially when it comes to my previous works like Catherine and the Wasteland (which you can find in TLDR Press’s first anthology here) and my essay on drafting a novel.

(By the way: they also have a woman’s anthology out right now featuring all female writers that you ought to buy, too, because it’s going to endometriosis research)

“The It” will be published in the TLDR Press Horror Anthology which is set to come out later this month. There will definitely be announcements made here and on Twitter as soon as both the ebook and the physical copy make their collective debuts.

I’m also still working on Spymancer and hope to be done with this beast of an urban-fantasy-cyberpunk-spy-thriller novel by the end of this year. I’m up to nearly 80,000 words now after slashing over 40,000 during the First Draft Purge of Words (like I need the extra work, ugh).

Happy for all of you that continue to stick around to read my stuff and hopefully you still will! I wish you all the best and thanks again!

I was at ArmadilloCon 2018 this past weekend. Didn’t stay for the whole event, but I got in on the critique panel, and got a short story of mine reviewed! Got some really great advice for it all around.

I plan on finishing up another short story this month and then I’m back to revising Spymancer again.

Hope all of you readers are doing well (and I hope this post comes out nice looking because I’m doing this on my phone). I hope remember to post something else before this month is over. Haha!

Kind of late news, but it’s cool to know someone is reading! Has some definite, fair criticisms; but overall a decent review that you can read here. Once I finish my novel, I hope to get back to this series again at some point. Although, I’ve recently begun to consider possibly turning it into an audio series…. 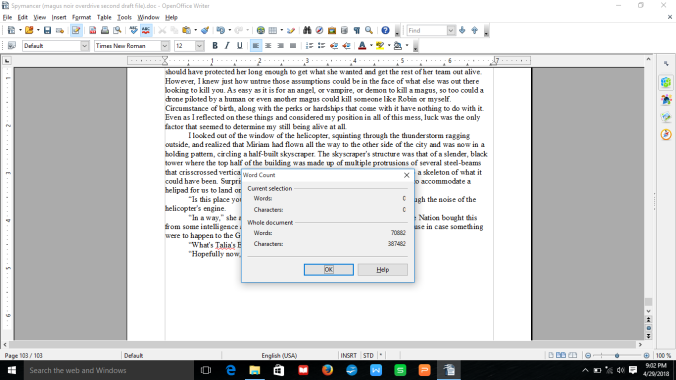 70,882 words. That’s how far I’ve gotten in revising the 85,000 word novel that was once zero words when I started it on one spring night in early 2016. And the crazy part? There’s a possibility that the final draft might go on longer than the initial 85k I ended with after the first go-around. What I’m really trying to say is that it’s now May 1st, and I did not meet my promise to finish the second draft of Spymancer.

The last I parted ways with my protagonist, James, he had conned his way into a nightclub and started shooting vampires in search of a demon who had done the bad thing. James hated the bad thing this demon did and decided that said demon needs to die. James thinks he might be close to death, too, but alas, it is not meant to be. Or is it? Probably. Can’t really pin that down right now.

However, what I can pin down, and probably should of had sorted already as early as a month ago was that my expectations for finishing this thing before my self-imposed deadline was ridiculous. As stated in an earlier post I made weeks ago, I was at the 45k mark and decided to dump the latter 40,000 words in order to do a complete re-write. That 85k which took 12 months to write, and 4 months of hard copy editing and post-draft outlining was grueling. To think I could pull off a 40k feat in a month was total hubris on my part. I thought it’d be more straight forward than this, but I was an idiot to think that I could pull this off while living on my own and pulling down a 40 hour per week day job on top of that. 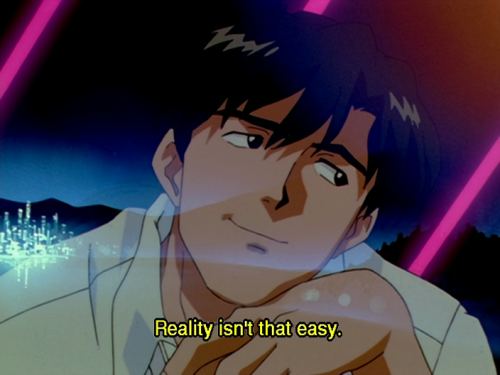 So, here’s what happening: as promised, I’ll post the first chapter of Spymancer on this website within the next week or so (split into two parts). After that, I’m taking the rest of May off. This is mainly because I’m burned out on writing the novel and would like to actually sit down and read or watch thing somebody else made for a change. It’s been a few months, so I’m overdue.

During this time I’m going to look over and re-evaluate the content I’ve been posting on Nocturnal Muse Sessions. Things have been pretty inconsistent around here, and with Austin By Night on the permanent back burner, I want to shift to a posting schedule that’s more manageable. That way you can get a decent stream of posts from me and you’re not left wondering if I got bored running this website and quit or simply died and forgot to let everyone know about it.

By June I’ll be back writing (and finishing) Spymancer, with, hopefully, a new posting schedule to boot! I’m glad you’ve stuck with me so far, and I hope to see that you continue to stick around. Be sure to follow me on twitter and I can’t wait to see how you like the first chapter!

TL;DR A Redditwriters Mixtape is now out in paperback! I just got the news yesterday and wanted to share here. It’s gratifying to know that Catherine and the Wasteland will now be printed and distributed on cool, smooth paper as intended! TL;DR, once just an anthology that was simply an ebook has now transcended from the digital to the physical. All profits got to Doctors Without Borders. Get your copy today! Link provided below.
Amazon Link

This happened a few weeks back, but iMorpheus wanted me to do an actual author interview with him because — apparently — I was that cool? It’s pretty much me answering questions he e-mailed me, but still, it was awesome! So here’s my “That Was A Good Read” podcast interview (last half of the podcast). Really enjoyed doing it! Link below.

C Scott Frank is one of several #redditwriters that I’ve had the pleasure of meeting on twitter. Of course, he’s a writer, but Scott also does interviewing on the side with his blog series After Words. In this interview, I was asked about writing processes, listening to others, and overcoming adversities in this really cool, digital sit fire side chat! Link provided below:

In another cool twist, iMorpheus came into my life again by featuring a video I did back in February where I did a poetry review of Altered Carbon (currently on Netflix). He was very kind to give my almost two minute video its chance at fifteen minutes of fame! You can find it towards the end of the podcast on his latest episode of “That Was A Good Read.” but listen to the whole thing! You are in for a literary treat! Link is below:

You may not know iMorphus, but I do. This may be considered old news, but over the past several months some of my work has been featured on his podcast. One in particular incorporated something really cool where they got a voice actress — Amanda Berthot — to read one of my flash fictions. You can hear it in the podcast I’ll be linking below (it’s towards the end). You should also follow their work on twitter where they’re also in the process of releasing a new game on steam! Seriously, if you love horror, check their game out! Also listen to the podcast!